The langar and the satsang - RSSB Newspaper Articles

The langar and the satsang 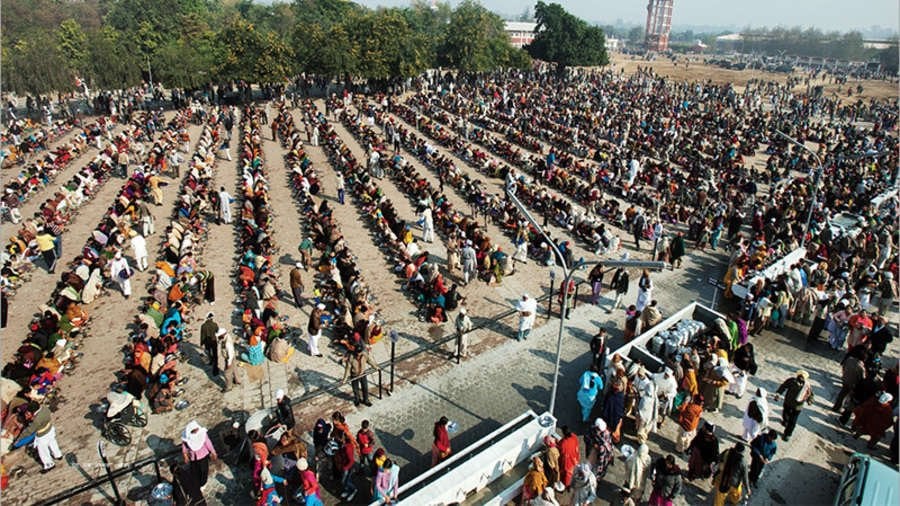 Batra is referring to the 19 designated Sundays on which the current patron of RSSB, Gurinder Singh Dhillon, presides over a satsang at the sect's dera. Dhillon, 63, addressed by the followers as Babaji, or the living master, has brought in several new systems, including these designated weekends. Followers from all over the country as well as abroad throng the small station in Beas on those weekends.

Easily among the largest anywhere, the langar at the dera is a sight to behold. Spread over an area of approximately 48 acres, it comprises living sheds for sewadaars, a langar-distribution area, store, kitchen, an office complex, loh sheds, and an open area for sangat.

Langars take place virtually round the clock, except for small breaks before and after sangat.

Seven loh sheds having 20 lohans in each shed are used for preparing chapatis(Indian bread). Six atta-kneading machines are used to supply dough to the lohan.

A loh or lohan is a mud stove, which has a large rectangular tawa (girdle) mounted on it and burns on wood and bricks made of wild grass.

There are also seven machines to cut peras (balls of dough which are then spread into chapatis) in the loh sheds. Each has a capacity to cut 10,000 to 14,000 peras an hour.

Dal, sabzi, and khichri are transported from the kitchen to distribution areas in stainless-steel rehris (containers). They are then towed by tractors. A screw pump is used to transfer dal/khichri from karahas (cooking vessels) to a rehri in a couple of minutes. Between 4,000 and 9,000 sewadaars are deployed in the langar during designated satsangs. 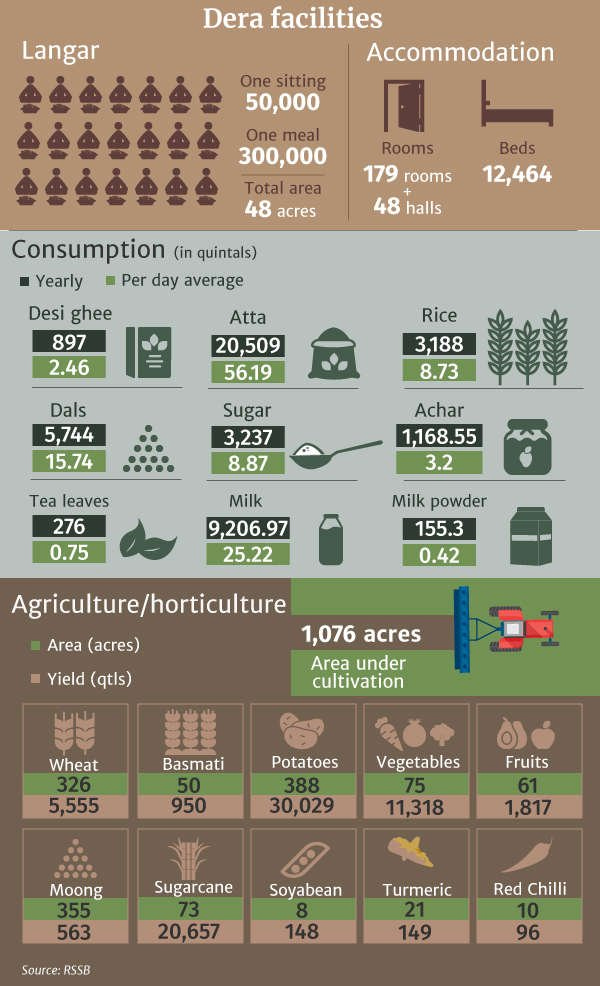 RSSB maintains a separate store for its langar. At the end of March, it had stocks worth INR4.7 crore. During the year, it had received provisions and vegetables worth INR43.5 crore and issued around INR42.86 crore. Less than a third of these came from sewa, while the rest was purchased.

In the year 2017-18, the langar store received a total of about 5,258 tonnes of wheat. In addition, 545 tonnes of organic wheat was received from the dera’s farms. Total atta issued during the period was around 3,500 tonnes.

“We don’t have gufas (caves). We have only these,” Jagdish Chander Sethi, secretary, RSSB, jokes as he shows around one of these large underground facilities. A former engineer from the Public Works Department of the central government, Sethi took early retirement in 2003 to join the dera. He has been holding the office of the secretary since 2005.

The satsang and the sangat
In the dera, no day goes without a morning satsang.

Satsang is the main source of spiritual enlightenment of the sangat (the community) and, hence, is the primary objective of the society. Every activity and facility at the dera and other centres of the sect is geared towards creating a smooth experience for people attending the satsang, dera administrators say.

Hundreds of satsangis or followers gather under a large satsang shed. It is a large open-sided structure with a roof made of lightweight steel. Everyone gets seated on the floor, made of compacted cow dung and mud, traditional material used in the flooring of village huts. The floor, cushioned with jute matting, can seat up to 500,000 people at a time.

Women take the seats on the left side of the elevated stage, while men sit on the other side. A lone singer seated in the semi-circular area in front of the stage sings hymns known as shabads. Her voice resonates through the state-of-the-art acoustics.

The shed also has giant video screens to project the visuals for people seated in the back when the crowds swell on designated weekends. It also has sprinkler systems attached to the roof that release mist to cool the air.

A few minutes before 8.30am, two people appear on the raised stage. At 8.30am sharp, the satsang begins. On days other than the designated Sundays, prominent satsangis and speakers from different faiths attend the gathering, and sometimes video recordings of satsangs by past masters are played.

The man presiding over the satsang on the day ET Prime visited the dera is Sethi himself. Raj Lavania, a fighter pilot in the Indian Air Force before moving to Air India, explains that Sethi’s satsang for the day is from Tulsidas’s Ramcharitmanas. "The underlying message is that God has created us to love him. That is the basic purpose of life. How to love him, only the guru can show you the way." The Lavanias moved here after the wedding of their only daughter.

The dera's administration is full of people like the couple. Retired bureaucrats and top cops from state governments, doctors, and professors are among the dera's permanent residents. With the first two masters of the dera having served in the army, the satsang has always had strong ties with the forces. Therefore, one often bumps into a retired colonel, commodore, or fighter pilot.

These people hold key positions as sewadaars-incharge of 42 departments that function together to keep the settlement bustling.

While on normal days the dera has a population of 4,000 to 5,000 people, during the 19 designated weekends each year, when the master himself presides over the satsang, the dera receives people in lakhs, sometimes as many as 500,000.

Such a vast gathering needs a lot of infrastructure in terms of facilities to eat, sleep, and pray. All this requires significant amount of land and abundant human resources.

This is why the dera constantly acquires land and makes investments. Some work out and some don’t. People who seem unrelated behave like they are in fact related. Sometimes they get along and sometimes they don’t.

But then, we already told you that story.