(ThePrint, New Delhi, India, 19 June, 2020) – The facility is spread over 70 acres in Chhatarpur, and will have biodegradable beds, 500 urinals, 450 bathing rooms, oxygen facilities and wheelchairs, among others.

A campus of spiritual organisation Radha Soami Satsang Beas in Chhatarpur, New Delhi, has been converted into a Covid-19 quarantine facility with 10,000 beds.

The facility, which reportedly has the size of over 22 football fields, will start functioning from 1 July.

When ThePrint visited the centre, 100 beds were found to be in place and preparations for arranging the remaining beds were underway.

“There are many people who do not have the facility of isolating themselves at home and many people also reside in slums. So, in that case, across Delhi, we have set up Covid-care centres,” Kejriwal said.

1,000 beds to have oxygen facilities

The Radha Soami Satsang Beas (RSSB) was established in India in 1891. At the centre of RSSB and its teachings is a ‘spiritual teacher’, who explains the purpose of life through daily meditation practices. Presently, the teacher is Baba Gurinder Singh.

The campus in Chhatarpur is spread over a sprawling 300-acre of land, out of which 70 acres has been set aside for the quarantine facility.

Officials at the facility said the centre is over 30 years old and the shed under which all the beds will be laid out is 20 years old. Prior to the centre being turned into a coronavirus facility, it was used for hosting satsangs (spiritual discourse).

The centre already has public announcement systems for communication, fans and CCTV cameras. It has now arranged 6 giant TV screens so that Covid patients don’t get bored at the facility. 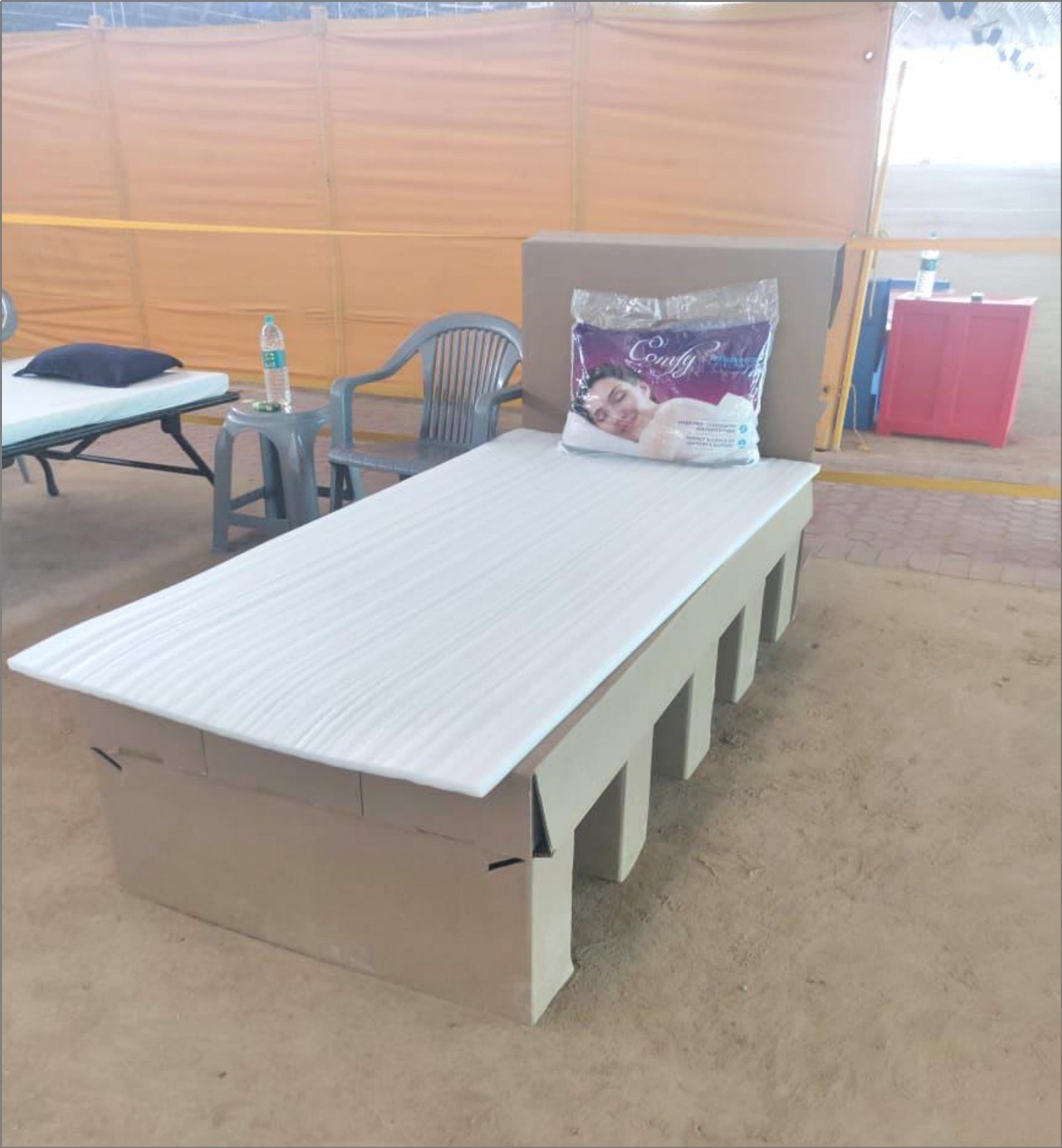 A biodegradable bed at the facility.

The facility is divided into blocks and each block consists of 100 beds.

Sethi said 500 to 600 permanent water closets, 500 urinals and 450 bathing rooms have been set up for the facility.

Sethi said food will also be provided by the RSSB. Additionally, it is also providing 1,000 chairs and 350 wheelchairs.

Officials at the centre said South Delhi district magistrate B.M. Mishra will be arranging the mattresses for the beds.

The beds, which have been approved for the quarantine facility, are made of cardboard and are biodegradable so they can be easily disposed of later. 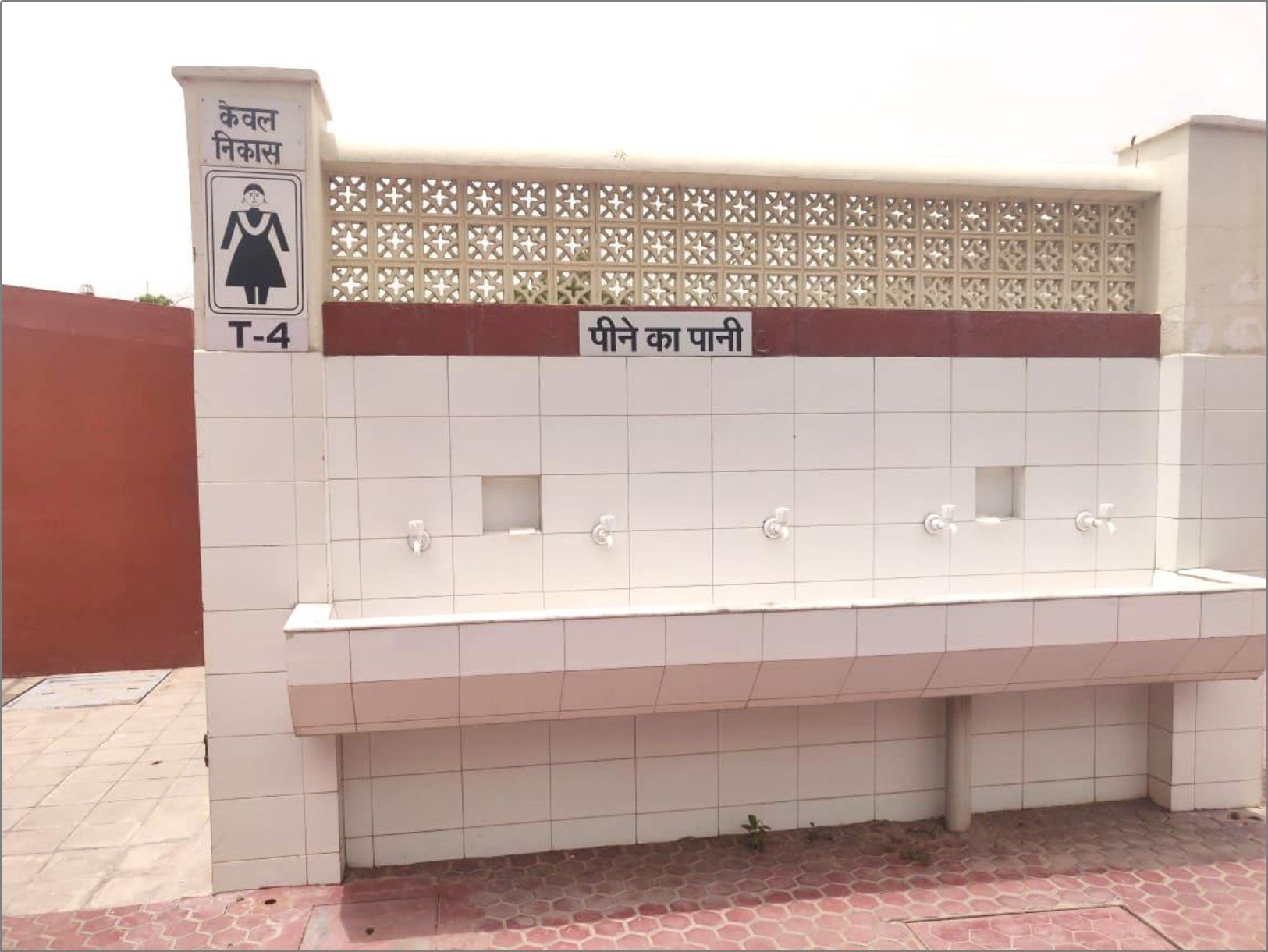 A drinking water area set up for the facility.

Sethi said the RSSB was waiting for the mattresses to arrive in order to complete their arrangements before 1 July.

Mishra has also proposed air conditioning for the facility, which may prove to be difficult given the time constraint and the fact that the shed is open from all sides, said an official at the campus.

The official, who didn’t want to be named, also told ThePrint there might be a week’s delay in completing the preparations and the centre might open by 7 July.

The sanitation facilities will be arranged by the South Delhi Municipal Corporation and paramilitary forces will be deployed for monitoring at the centre, apart from the healthcare workers.

Asked about the expenditure incurred by the RSSB for setting up the facility, Sethi said: “Well, there’s no data on that yet, but it will go in crores. For instance, something as small as disposable plates for food is costing us an exorbitant amount. It is adding up to Rs 30 for 10,000 patients and 2,000 healthcare workers each per day.”

Officials at the centre, however, expressed confidence in their arrangements and said usually they host over 2 lakh people for satsangs. Therefore, hosting 10,000 patients shouldn’t be a problem to them, they added.